Thanks to all the exhibitors below for helping to make last year's show a success.

The RISC OS London show is the biggest RISC OS event of the year, presented by ROUGOL, the RISC OS User Group Of London. 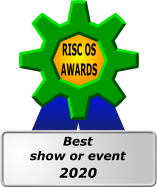